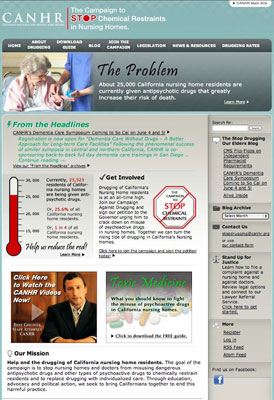 The Campaign to Eliminate the Inappropriate Use of Psychotropic Drugs and Improve Dementia Care in Nursing Homes is working to replace a “culture of drugging” with person-centered care. FDA warnings and numerous studies show the harmful effects of drug use with this population and CANHR found that nearly one-third of California’s nursing home residents living with dementia still received powerful antipsychotic drugs that are neither intended nor FDA-approved for their medical condition. CANHR’s campaign has documented a reduced use of “chemical restraints” by 20%+ for residents with dementia statewide. The long-term goal is to reduce usage of these drugs only for those instances where they are medically indicated. Since launching in 2010, CANHR has co-hosted 13 dementia care symposia bringing palliative care experts from around the country to teach evidence-based, nonpharmacological models for managing aggression, agitation, wandering, and other behaviors commonly associated with dementia reaching thousands of dementia care practitioners, social workers, nurses, facility administrators, and family caregivers. To improve transparency for caregivers, CANHR publishes quarterly data (collected through the Freedom of Information Act) on nursing home psychoactive drug use. CANHR also uses targeted media campaigns (statewide and nationally), provides curricula and training material, and offers consultation to others seeking to replicate this work.